The number of newly announced deaths from the new corona infection continued to rise today to a record 271 nationwide.

The number of new infections announced today by the Tokyo Metropolitan Government is 17,864, and the number of infections continues to stay in the high 10,000s. 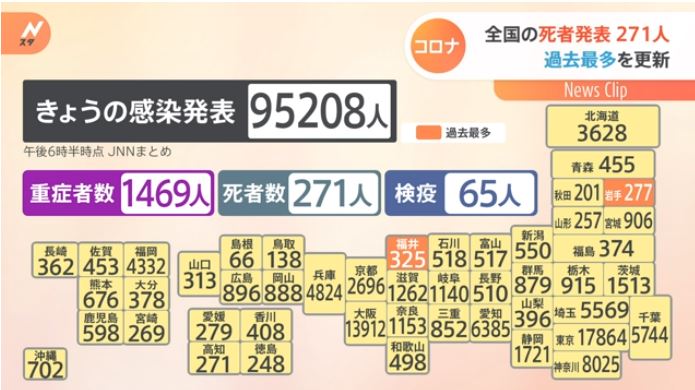 The number of newly announced deaths from the new corona infection continued to rise today to a record 271 nationwide.

The average number of new infections over the past seven days has decreased by about 20% compared to a week ago, but experts at a Tokyo metropolitan government monitoring meeting held today pointed out that this may have been due to a decrease in testing and delays in reporting.

After Tokyo, Osaka, Kanagawa, and Aichi are the most common cities. Iwate and Fukui have recorded a new highest record of daily cases.

A total of 271 new deaths have been announced, 35 more than the day before yesterday, which was the highest number ever announced per day.

Today, the highest number of deaths announced was 54 in Osaka.