42-year-old mother arrested for murdering her then 7-year-old son at home in Yamato, Kanagawa

KANAGAWA – A 42-year-old mother has been arrested on suspicion of murder for suffocating her then 7-year-old son to death at her home in Yamato, Kanagawa, in 2019. The mother had three other children, all of whom are now deceased. 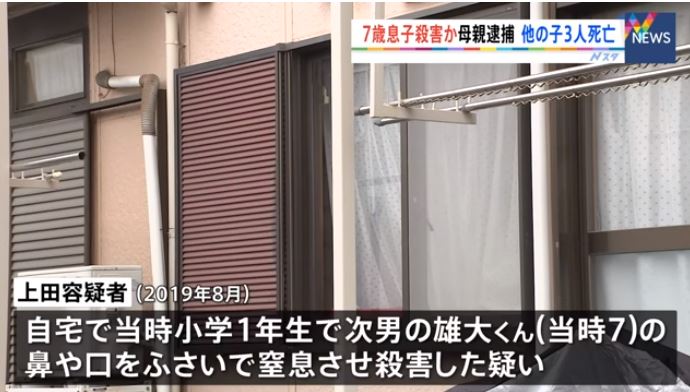 42-year-old mother arrested for murdering her then 7-year-old son at home in Yamato, Kanagawa (JNN)

In August 2019, Ayano Ueda, 42, a self-proclaimed nursing assistant who was arrested on suspicion of murder, is suspected of killing her second son, Yudai, then 7, a first grader at the time, by blocking his nose and mouth at her home in Yamato City and suffocating him.

The suspect called 119 himself, and Yudai was pronounced dead at the hospital where he was taken.

Subsequent interviews with investigators revealed that in addition to Yudai, Ueda had three other children, two boys and a girl, all of whom are deceased.

A resident of the neighborhood said, “I heard (from the suspect) that the younger child (other than Yudai) had died. He said, ‘This is not the first time,’ because ‘two children have died before.

In response to the investigation, Ueda denied the charges, saying, “I didn’t do anything.