A sixth-grade boy was hit by a car in a crosswalk and critically injured. “I didn’t slow down because I thought I wouldn’t hit it.”, driver.

KANAGAWA – Yesterday morning, February 27, a sixth-grade boy walking along a crosswalk at an intersection in Ayase City, Kanagawa Prefecture, was hit by a car and left unconscious and in critical condition. 52-year-old man driving the car was arrested by the police. 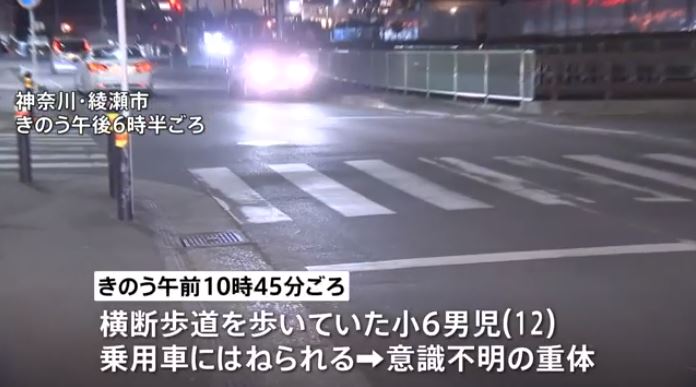 A sixth-grade boy was hit by a car in a crosswalk and critically injured. “I didn’t slow down because I thought I wouldn’t hit it.”, driver. (JNN)

At around 10:45 a.m. yesterday, a sixth-grade boy (12) was crossing a crosswalk at an intersection in Fukayagami, Ayase City, when he was struck by a passenger car traveling straight ahead.

The boy was rushed to the hospital after the accident, but is in a critical condition, unconscious after suffering a severe blow to the head. The police have arrested Yukihiro Ishizu, 52, a company employee from Ayase City, who was driving the passenger car on suspicion of negligent driving and injury.

According to the police, there were no traces of brakes at the scene, and the suspect admitted to the charges, saying, “I was aware of people crossing the street, but I didn’t slow down because I thought I wouldn’t hit them.