A man working at a factory in Aso City, Kumamoto Prefecture, Japan, suffered burns all over his body.

KUMAMOTO – During a wild fire in Aso City, Kumamoto Prefecture, March 5, a man working in the field suffered burns all over his body, and the fire spread to his car. 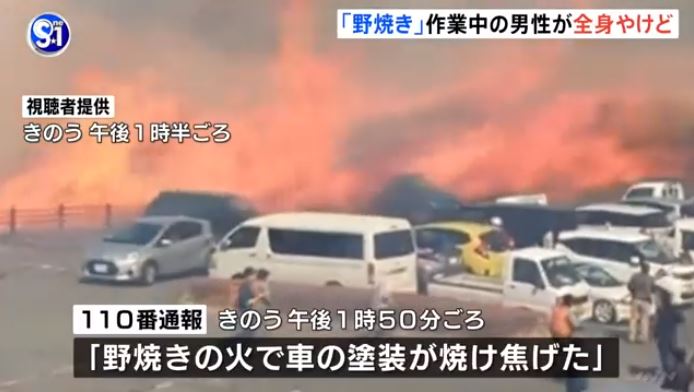 A man working at a factory in Aso City, Kumamoto Prefecture, Japan, suffered burns all over his body. (TBS News)

The incident occured at Daikanbo, a sightseeing spot in Kumamoto. The videos taken by one of the witnesses shows the fire getting into the parked cars as the gushing wind blows.

At around 1:50 p.m., a 110 caller reported that his car’s paint had been scorched by a wild fire, and the police confirmed that the entire passenger car had been burned. The driver of the car was not injured.

In a field in Ichinomiya-cho, Aso City, two men who were burning land failed to escape from the fire, and one suffered burns all over his body and the other suffered burns on his face.

There have also been a series of other wild fires that have spread.