Miyagi and Fukushima areas hit 6 on the Japanese seismic intensity scale, killing some.

MIYAGI & FUKUSHIMA – Yesterday evening, there was a very strong earthquake with an intensity of 6 upper on the Japanese seismic scale in Miyagi and Fukushima prefectures. So far, three has been confirmed dead in Soma City, Fukushima Prefecture. 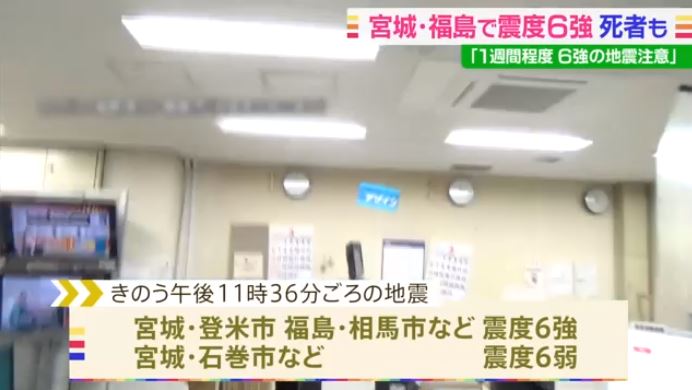 The epicenter was off the coast of Fukushima Prefecture, with an estimated depth of 57 km and a magnitude of 7.4, indicating the magnitude of the earthquake.

As for human casualties, one man has been confirmed dead in Soma City, Fukushima Prefecture, and two more at the latest news.

According to JR East, the Tohoku Shinkansen train “Yamabiko No. 223” from Tokyo to Sendai derailed between Fukushima and Shiraishi Zao stations. 16 cars of the 17-car train derailed, stranding 75 passengers and 3 crew members at the scene, but none of them were injured.

Tohoku Shinkansen trains will be suspended all day today between Nasushiobara and Morioka.

The earthquake also caused a series of power outages in various areas, and as of 5:00 a.m., a total of nearly 50,000 homes were still without power in Fukushima, Miyagi, and Iwate prefectures.

The 23 wards of Tokyo also measured an intensity of 4 on the Japanese seismic scale, and operations were temporarily suspended on all train lines near the end of the day. The JR and private railway lines in the Tokyo metropolitan area are operating as usual this morning, with the exception of some lines. The Tobu Line will operate at a slower speed than usual.